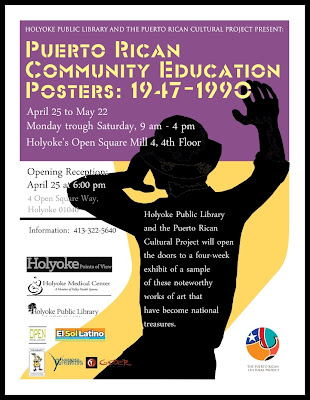 After WWII and a decade of experience with New Deal programs, Puerto Rico was on it’s way to becoming a modern industrial society. Art was placed at the center of a massive public education campaign aimed at teaching the rural population about community self-reliance, democracy, public health, education, conflict resolution and the appreciation of Puerto Rico’s cultural traditions.
Artists, writers, and filmmakers joined the social experiment, carried out by means of the creation of popular books, movies, posters, and a variety of educational programs.  Stateside artists and writers like Robert Gwathney, Edwin Rosskam, and Jack and Irene Delano joined local Puerto Rican artists like Lorenzo Homar, Julio Rosado del Valle, Rafael Tufiño, Eduardo Vera Cortés, and José Meléndez Contreras.  Together they produced a heritage of graphic art pieces, considered among the best in America.

On April 25th at 6:00 PM at Holyoke’s Open Square Gallery Mill 4, the Puerto Rican Cultural Project will open the doors to Puerto Rican Community Education Posters: 1947-1990, four-week exhibit showcasing some of these noteworthy works of art that have become national treasures. This exhibition of works bearing the DivEdCo (Division of Community Education of Puerto Rico) collection signature is part of the Points of View series of art and cultural events taking place during April 2013 in venues throughout Holyoke’s Arts Innovation district.
Admission is free. Points of Views is sponsored by the Holyoke Public Library and the City of Holyoke Office of Economic Development. For more information call the Library (413-322-5640) or visit the facebook page of the Puerto Rican Cultural Project.
Map with directions to Open Square Mill 4
Español

Email ThisBlogThis!Share to TwitterShare to FacebookShare to Pinterest
Labels: Exibition
The place was packed with an audience from Holyoke and the Valley. The music was superb. This was a historical multicultural event for the Holyoke people of all national backgrounds. Keep in touch for next coming events.
Thanks to all who helped this become a memorable evening.
!Feliz Navidad! Merry Xmas! 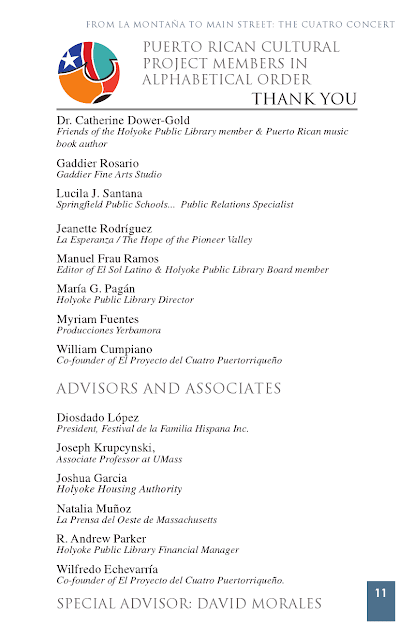 Email ThisBlogThis!Share to TwitterShare to FacebookShare to Pinterest
Labels: Concert

From La Montaña to Main St: The Cuatro Concert 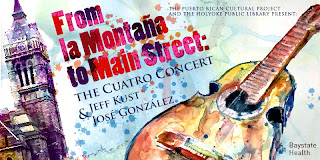 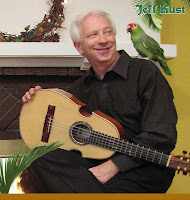 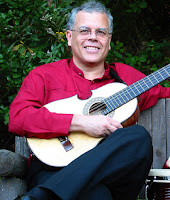 Email ThisBlogThis!Share to TwitterShare to FacebookShare to Pinterest
Labels: Concert

William Cumpiano speaks to a group of Holyokers ahead of the screening of the film The Puerto Ricans and Their Stringed Instruments, Vol I. Cumpiano shared information on the Cuatro Project and the making of the only documentary on the Puerto Rican cuatro.


From Cidra To Springfield: Miguel González, The “Golden Beak” (Wilfredo Echevarría)
The film follows the life and career of Miguel González, a traditional jíbaro décima singer who was the past Grand Marshall of the New York City Puerto Rican Day Parade. Transplanted from his family home in Cidra, Puerto Rico, to Springfield, Massachusetts—where he has lived most of his life—González has continued the old ways of décima troubadours and still performs on stages across the State. (25 minutes, Spanish with English subtitles)

The Puerto Rican Décima (Myriam Fuentes) (Info in Spanish)
On the 400th anniversary of Don Quixote, a group of renowned décima troubadours came together to pay homage to the most eminent work of literature in the Spanish language and to revive the “Mesa Redonda” or Round Table: a challenging competition among the best décima poets who are expected to compose verses on the fly. (25 minutes, Spanish with English subtitles)

Email ThisBlogThis!Share to TwitterShare to FacebookShare to Pinterest
Labels: Film 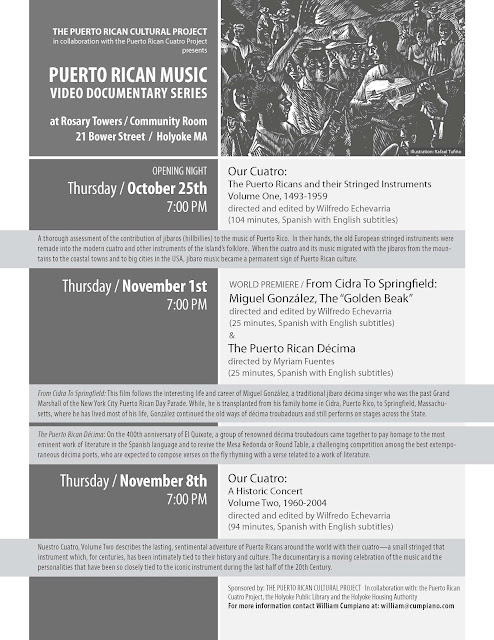 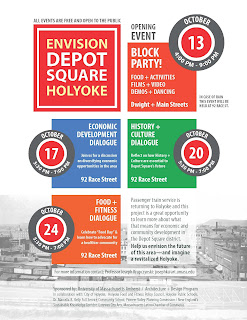 What is Envision Depot Square Holyoke?


A series of public venues to learn more about new opportunities for economic and community development in the Depot Square district in the city of Holyoke, where passenger train service is returning.

Activities include public dialogues with community leaders on History and Culture, Economic Development, and Health and Wellness.  There will be demos, food, music and dancing.  Screening of documentaries on the cuatro and jíbaro music will take part at Rosary Towers. All films have English subtitles.